Brazilian ref pulls a gun on a player during a match

Brazilian Referee Gabriel Murta is unsurprisingly facing disciplinary action after pulling a gun on players during a dispute.

Gabriel Murta was allegedly kicked and slapped by players from lower-league Amantes de Bola, while the manager invaded the pitch demanding a red card.  The official is said to be part of the police force and rushed to the changing room, retrieved his gun and proceeded to threaten the players.

The shock incident happened at the weekend during a league match in Brumadinho near Belo Horizonte, Brazil’s sixth largest city.

The other officials try and restrain the out of control Murta as he clearly holds his gun on the pitch. 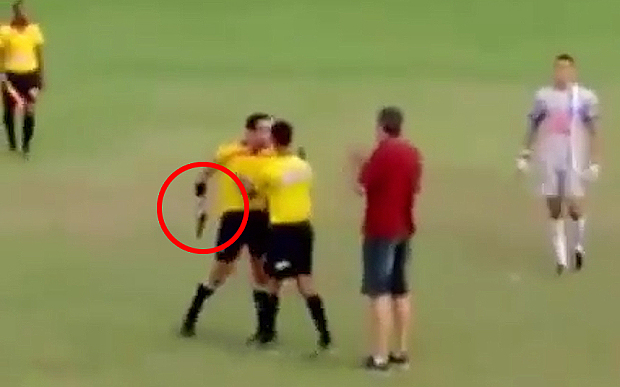 Gabriel clearly holding a fire arm while a third official attempts to calm down the situation.

Referees’ chief Giuliano Bozzano said the official felt threatened and went to look for the revolver to defend himself.

Mr Bozzano said “The Minais Gerais Football Federation has already summonsed the referee and a psychologist to a meeting and I’m going to talk with him.

“On the basis of that conversation and his account of events and the results of the psychological assessment I’ll decide what if any measures to take.

“What’s happened is obviously not a common occurrence and I don’t want to rush into anything.

“At the moment it happened he’s opted for getting his gun because in his view it was a question of controlling a situation.”