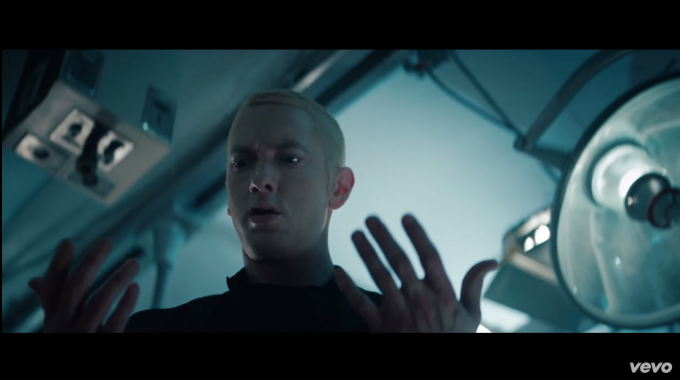 ‘Phenomenal’ appeared in Jake Gyllenhaal’s latest hit film South Paw.  Jake stars as a retired fighter who launches a comeback following the death of his wife. The film’s impressive cast also includes Forest Whitaker, Naomie Harris and Curtis ‘50 Cent’ Jackson.  Eminem was originally set to star in Southpaw when it was announced in December 2010, but later postponed the project and eventually dropped out entirely and replaced by Jake.

The ‘Phenomenal’ music video opens with Eminem waking up in a hospital, confused and appears to have lost his memory.  After pulling out his IVs, a doctor confronts the rapper but is easily taken out. Eminem is surprised by his own martial art skills.  He then proceeds to try and flee the hospital but encounters numerous armed guards, he fights his way through the halls which leads to his escape.

Eminem finds himself on the streets of Tokyo walking amongst the crowd so not to be seen but its not long until he is pursued again by more men.

The video later see’s a cameo of John Malcovich who play’s the villain, Malcovich makes an offer to Eminem, he declines and forced to flee once more.  The action continues with a car chase  featuring Randall Park with a bit of comedy included and ends with a helicopter scene.

Eminem has a heavy landing on a stage with Dr. Dre, picks himself up and walks towards a microphone to play for the crowd.