As the Star Wars Battlefront beta comes to a close, we should all take a moment to appreciate this quick thinking from video gamer Zephs. Turning an almost certain death situation into a multi million view viral video. 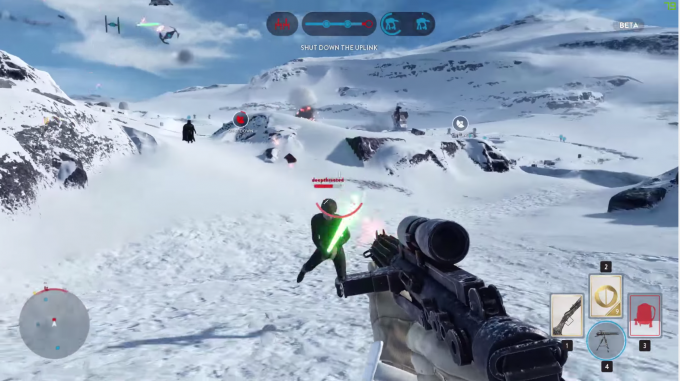 Battlefront heroes Darth Vader and Luke Skywalker can sometimes be quite overpowered in the game, so when you see one target and force leap towards you, its pretty much goodnight.

During a online match of Walker Assault on the frozen planet of Hoth, Zephs see’s Hero Skywalker sprinting across the map and decided to take some pop shots at him, they proved ineffective.  Skywalker then throws his attention to Zephs who continues firing but see’s that Luke is not taking much damage and decides to retreat, leading Skywalker towards the AT-AT.  Luke closes in, slashing his lightsaber.  Just when it looks as if he’s going to get his kill, a nearby AT-AT crushes him, leaving his body half emerged in the snow as it steps off.

The hilarious clip was uploaded YouTube user Zephs and has since gone viral with over 3.7 million views in just 3 days, one of those views coming from Mark Hamill Himself!

Just watched myself get squashed like a bug by an Imperial Walker… good work! https://t.co/6UBRBvJdHF